UCGD Compute Infrastructure at the U of U CHPC

The Cardiovascular Development Data Resource Center (CDDRC) is backed by a significant compute infrastructure owned and managed by the Utah Center for Genetic Discovery (UCGD) and housed at the University of Utah's Center for High Performance Computing. The UCGD owns 100 nodes which provide 3,088 cores of compute power and a collective 29 TB of RAM. Most of these nodes are in a Slurm based HPC cluster, but several interactive nodes provide for real-time analysis and development work. In addition to UCDG owned nodes, we also have guest access to an additional 1,231 nodes which provide 35,698 cores of compute power and collectively have over 187 TB of RAM.

The UCGD also owns 4,920 TB of Lustre high performance, distributed file system that boast 150 Gb/s aggregate bandwidth. This provides the ability to read a laptop's worth of data (500GB) in under 30 seconds. In addition, the UCGD owns 600 TB of S3 compatable CEPH object storage with 40 GB/s aggregate bandwidth. 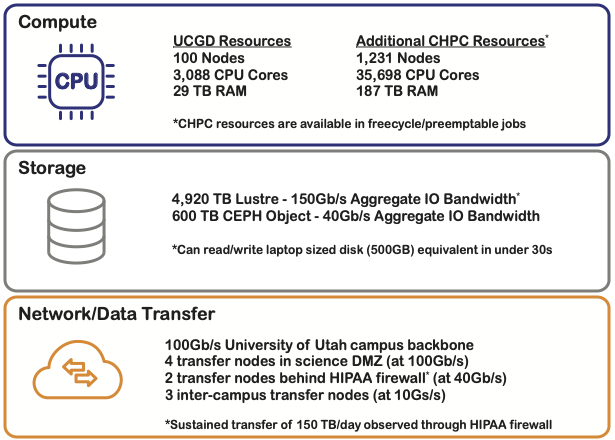